Magnificent Bastards and the unmatched valor of the US Marines in Vietnam. If you ask any Vietnam vet from the magnificent bastards, they will all agree that blood, terror, mud and horror are four perfect words that describes the reality as well as the brutality of the Vietnam war that many marine divisions such as the magnificent bastards, had to endure. Many historians proclaimed that ultimately, the Vietnam war started as a result of the United States strategy of containing communism during the Cold War era. However, the single act that started the Vietnam war, occurred in 1964 during the Gulf of Tonkin incident, in which a U.S. naval destroyer engaged with a North Vietnamese fast attack craft.

Following the Gulf of Tonkin Resolution, the U.S. president was subsequently given authorization to increase its military presence in Vietnam. As such, the U.S. began the process of deploying the tip of their sword, the Marines. In particular the 2nd Battalion, 4th Marines also known as the magnificent bastards.

Magnificent Bastards Were First To Arrive & Last To Leave

The magnificent bastards have been well known for their saying “first to arrive, last to leave”. As is the case with World War 1, Word War 2 and the Korean war, marines were the first combat units to be deployed at the beginning stages of the Vietnam war during 1965. In fact, the very first skirmish that occurred between the U.S. and North Vietnam occurred between November 14 – November 18 of 1965 and was called the Battle of La Drang.

During this battle, both sides suffered heavy casualties and while the Vietnamese lost 1000 bodies, the U.S. had nearly 250 soldiers killed. Despite the fact that marine divisions such as the magnificent bastards were continuously put on the forefront of the toughest and most important battles of the war, it is not the head-on combat itself that brought the blood, horror and terror that they mainly endured, it was Ho Chi Minh’s military policy of psychological warfare. 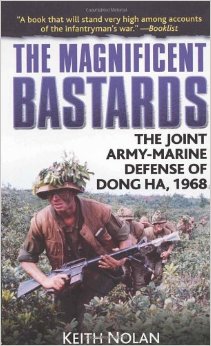 Said in simple terms, most of the horror that the Marines faced, occurred as a result of psychological warfare policy that was introduced by Ho Chi Minh. In his vision he specifically wanted to demoralize and terrorize the U.S. into surrendering. As such, most of the battles that the marines encountered were not head-on but rather, ambush style attacks. This in itself invoked a feeling of uncertainty because marines who were out on a patrol simply did not know when they would be greeted by an onslaught of bullets in the thick of the night.

Booby Traps
Another atrocity the marines endured is the fear that they could literally die at any moment, even if there were no enemies in sight. Oftentimes, the Vietnamese would leave their bases intact when they realized that the marines on their heels. However, they would booby trap everything from a book that lies down on a pressure activated improvised explosive device, to a branch that was tied to a booby trap that when activated, would lead to the deployment of a customized impale based device such as a tree trunk that’s wrapped around with 12 inch spikes. It’s also worth noting that on top of creating pits that were filled with sharp spikes and other explosive related booby traps, they also put the urine and feces of animals on their impale based booby traps so that soldiers would get an infection if they were penetrated by said booby trap.

The Murdering Of Prisoners
Even though it is against the Geneva code for any military force to kill a prisoner of war, marines had the difficult time of having no choice but to adhere to the Geneva code of warfare while their North Vietnamese counterparts would torture, maim and dismember American prisoner of wars. In some instances they would even kidnap a soldier from a patrolling unit, as to which they would dismember and or behead, and subsequently put said soldier on display on the route of the patrolling unit’s path, so that they could witness the horror their combat buddy and ultimately friend, had to endure.

Terrain
On top of the fact everything the marines endured, they also had an extremely difficult terrain to deal with. Besides the fact that they had to traverse through the jungle which in itself consisted of poisonous insects and other animals, Vietnam itself is filled with a thriving population of mosquitoes that range in the millions. Soldiers would experience dengue fever and other illnesses as a result of mosquito bites. Worse yet, the climate of Vietnam itself makes the terrain extremely humid and wet at times. As such, soldiers who traversed through water-based terrain – which was a common occurrence – would easily get trench foot or an infection from a prior wound.