The 1st Marine Division of the United States Marine Corps commands respect and loyalty. This division is the largest and oldest division in the U.S. It consists of over 19,000 men and women who are ready to go into battle at any time they are needed. It is considered an active duty division due to this fact. The Marine Corps has two other division but its relies mainly on the 1st one. It is an infantry division that specializes in ground combat. It’s current location is California. To be more exact, it’s located at the Marine Corps Base Camp Pendleton. Fighters have the capability of undertaking amphibious operations as well as any other task in the land.

A Little Bit of History 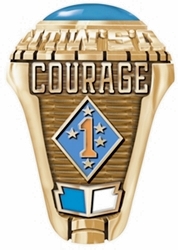 The 1 division has been in existence for more than a hundred years. Having been established in 1911 in Guantanamo Bay, Cuba, they participated in WWI. Soon afterwards it was dismissed. However, in 1940 during the outbreak of WWII it was re-established. They were sent to New Zealand and the Solomon Island to be ready to attack.

They participated in the Battle of Guadalcanal. Another four battles were combated during that time. They also participated in the Korean War, killing tens of thousands of opposing soldiers. Later on, they would fight for 6 years in the Vietnam War. In 1990, the 1st Marine Division was sent to Iraq. In about 100 hours of heavy military combat, it helped free Kuwait from Iraq’s dominance.

The division participated in a couple operations in the Iraq War. This served to take control of the Al Anbar region as well as Baghdad and Tikrit in a really successful operation. In 2007, it was sent back to its headquarters in California.

Ever since the war with Afghanistan started, troops belonging to the 1st Marine Division have been regularly sent to that area of the Middle East. We can’t really talk about the U.S. Military history without including the 1st Marine Division in the story-line as one of its main participants. The 1st Marine Division has also participated in humanitarian activities. In 1975, it provided both food and shelter for Shaigon citizens and refugees after the Vietnam war. Also, in 1990 after the Persian Gulf War, it sent resources to people in Bangladesh and Philippines after two natural disasters occurred there.

Marine Corp Rings
Marine Corp rings come in a wide range of designs and types. They can be customized to fit your specific preferences. Marine Corp Rings are available for both men and women and are a very good way to show that you are proud of our 1st Marine Division which works hard at protecting our lives.