Silver Marine Corps Rings that are ready for engraving and customization. Rings are available in premium silver and valadium. The U.S. Marine Corps is a relatively small but highly elite group of men and women who protect our freedom and defend our allies throughout the world. Originally they were infantry troops that were stationed aboard naval vessels.  Currently the  Marine Corps  is one of the world’s most feared amphibious and ground assault forces. The history of the Marines is long and distinguished. Their assault on the island of Iwo Jima during World War II constitutes one of the most inspiring battles ever seen by man. But Iwo Jima isn’t the only bloody battle Marines have ever seen – they’ve been in the forefront of almost every American battle since the country was born. 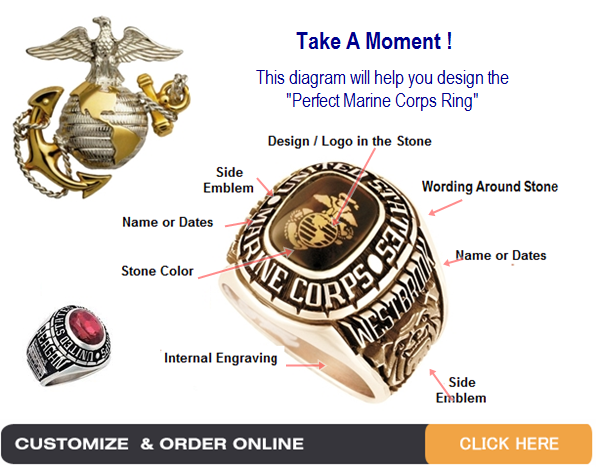 Marines are the Few, the Proud and the Brave.
Few, because Marines are elite soldiers and the standards of the Corps are high: it can be more difficult to become a Marine than it is to join some of the other branches of the armed forces. Proud, because of their fearless courage, selfless sacrifice and relentless sense of honor. And Brave, because Marines often are the first to arrive on enemy beachheads leading the way for other troops that are invading hostile shores.

Silver Marine Corps Rings perfectly symbolizes everything that Marines stand for: physical strength, strong will, commitment to country and comrades, a storied past and a superbly effective present. Strength of purpose and a willingness to make sacrifices when necessary. But above all, Marine jewelry symbolizes the honor of the Corps.

Past and present Marines deserve recognition for all that they do and have done in the past. Marines are a proud group, so there’s no better way to thank them than by giving them Marine jewelry. 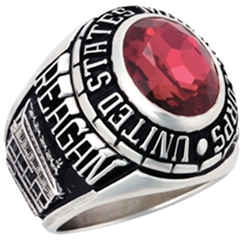 And many Marines buy Marine jewelry  to display their affiliation and to remember their experiences. This jewelry is both beautiful, memorable, and a powerful symbol of a Marine’s dedication and honor.  Marine rings, cuff links, tie tacks, watches, lapel pins and other pieces of Marine jewelry are available online. Many pieces can be personalized with a Marine’s name or initials.

Other Marine jewelry is designed to show service in a particular task force or other unit, or service during a specific war or military engagement such as the Persian Gulf, Vietnam, the Korean Conflict or World War II.

Still other pieces incorporate the design of a combat medal or other decoration that’s been awarded to the Marine. Some Marine jewelry is even designed for ex-prisoners of war. Marines are few in number: not everyone can make the cut. But Marines make up for their lack of numbers with their renowned courage and dedication. They’ve made us proud with their service, and they’ve defended us against all enemies. We can thank them with a beautiful Silver Marine Corps Ring