The 2nd Marine Division is renowned for it’s efficiency and loyalty. The U.S. 2nd Marine Division is one of the divisions of the United States Marine Corps. It is headquartered at Julian C. Smith Hall and based at Marine Corps Base Camp Lejeune in North Carolina. It forms part of the ground element of the II Marine Expeditionary Force. The full division was activated on 1st February 1941, even though the 6th Regiment of the division did take part in World War 1. With their motto of “Follow me”, the division is nicknamed “The Silent Second”.

To join the Division, one must first pass through the initial 12 week boot camp at Marine Corps Recruit Depot, San Diego, California or Parris Island, South Carolina. This is followed by School of Infantry training at Camp Pendleton or Camp Geiger.

Non infantry marines will attend a 29 day Marine Combat Training before proceeding to the appropriate occupational specialty. On the other hand, infantry 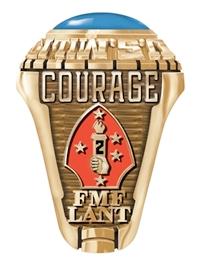 Marines will then proceed to attend a 59 day Infantry Training Battalion program before being assigned to their units.

After the end of World War II, the division didn’t take part in any other major action until 1958 when they participated in the Lebanon crisis. In 1962, they were actively involved in reinforcing Guantanamo Bay during the missile crisis in Cuba.

The division also played a part in Operation Power Pack in the Dominican Republic in 1962. During the 1983 barracks bombing in Beirut, the division lost 241 sailors and marines. In the late 1980’s, the division did participate in the invasion of Panama in what was known as Operation Just Cause.

In the 1990’s, the division did evacuate American and allied civilians out of Liberia in Operation Sharp Edge. They were then deployed to Saudi Arabia to support Operation Desert Shield before being used to liberate Kuwait during the widely talked about Operation Desert Storm.  Task Force Tarawa which crossed into Iraq on the very first day of the ground war.

They were charged with the key responsibility of capturing Jalibah airfield. Later they took part in one of the biggest battles in Iraq in the town of Nasiriyah. The division was later moved to Al Kut where they provided both security and stabilization operations in the central part of Iraq.

It is worth noting that for all the gallant marines who have fought in the above mentioned campaigns, it is possible to get personalized Marine Corps Rings custom made. Rings communicate different messages such as the years of service and family name. They can also include the division emblems on the sides.