Iwo Jima is an island situated that is a part of the Japanese Volcano Islands. The Battles of Iwo Jima was a battle that took place during the World War II. It was between the US and Japan where the US marines landed to the Iwo Jima Island to capture it. The US marines fought against the Imperial Army of Japan to establish its rule over the Island. The operation was named Operation Detachment and the battle took place in 1945 between February 19 and March 26.

Iwo Jima is  small, around 8 miles square in size. But the US army decided to invade the Island so that they have space for their fighter airplanes and other bomber vehicles to attack Japan from the Island. The flat surface of Island was more favorable for the purpose. The Island mostly remains flat except for a mountain, Mount Suribachi. It is located towards the Southern part of the Island.

Looking at the topography of the Island, the battle was planned to happen for a week by the US soldiers. But the Japanese Army was strong enough to oppose the US Marines that it took about a month for them to completely bring the Island under their control. The fight was so furious that it prolonged the time of capture. The US Army finally succeeded in occupying the Island and established their control. 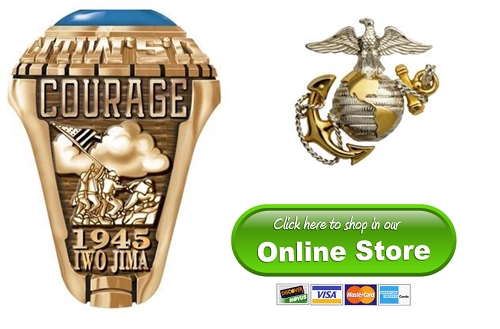 The battle involved 30,000 US marines that landed on the shores of the Iwo Jima Island. On the arrival of many marines, the Japanese Army made an attack on the US soldiers and subsequently killing many of them. They had planned the attack by digging tunnels and hiding places from where attacks were carried out. This was a shock to the US Army who thought the Japanese might have been killed by their fight airplanes. The attacks continued for about 36 days with many brutal killings. There were losses in terms of life on both the parties. The loss of lives from the Japan was exceedingly high. Only

216 Japanese soldiers were taken as prisoners from among 18000. All the remaining soldiers died in the battle. The reason is attributed to the fact the Japanese decided to fight till the death. The US Army lost about 6800 soldiers in the battle. Marine Rings remember these heroes with honor and dignity. Finally, the US Army managed to raise their flag on the top of the Mt. Suribachi. Joe Rosenthal took a picture of the soldiers raising the flag on the mountain. This photograph earned a lot of fame all over the US. It is this picture that was made as a statue in the US Marine Corps Memorial located at Washington, DC. The US government honored 27 soldiers with the Medal of Honor for their bravery during the battle.

Marine Corps Rings are available with the Iwo Jima emblem cast on the sides, customers can personalize these rings with their name and dates.